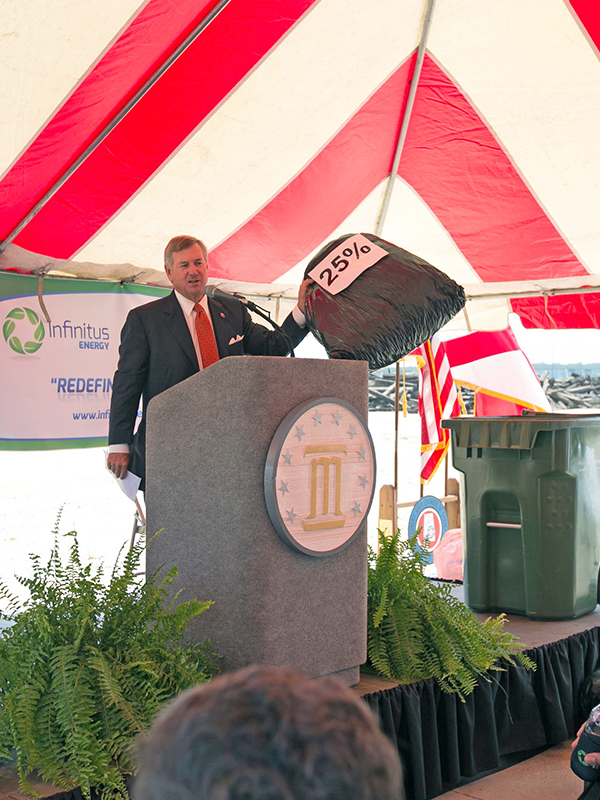 MONTGOMERY, Ala – July 17, 2013 — Ground broke today on an integrated Materials Recovery Facility (MRF) that will allow the Montgomery, Alabama community to divert up to 85 percent of waste from the City’s landfill. Infinitus Energy will own and operate the facility, known as the Infinitus Renewable Energy Park at Montgomery (IREP at Montgomery).  Eugene-Oregon based Bulk Handling Systems (BHS) designed, engineered, and will manufacture and install the MSW recycling system.

IREP at Montgomery will feature the latest in screening, air and optical sorting technology. The $35 million, 81,992-square-foot facility is expected to be operational by June 30, 2014. It will process up to 225,000 tons of waste annually, and recover an estimated 95% of recyclables. In Phase II of the project, BHS subsidiary Zero Waste Energy (ZWE) will install its SmartFerm anaerobic digestion system to convert organic waste into compressed natural gas (CNG) and compost.

Once the facility is operational, residents will place all household waste and recyclables into one city-issued bin, which will be collected by the City of Montgomery Sanitation Department.  “The beauty of this project is that residents don’t have to do anything differently.  All of the separating takes place at the MRF,” said Mayor Todd Strange, “and the 25-year partnership the city has with Infinitus ensures that materials will be recycled.”

“IREP at Montgomery will provide recovery rates not achievable by single stream recycling programs that rely on residents to sort trash themselves, which addresses the recycling needs of the community without additional capital investment from the city,” Infinitus’ CEO Kyle Mowitz said.

“This is a long-term green investment in our city and state.  With this project, Montgomery will be seen as a leader and trendsetter in implementing green technology for the benefit of both our residents and our planet,” said Mayor Strange.  “Diverting tons of material away from landfills and incinerators and turning those materials into valuable resources generates a host of financial, environmental and societal returns.”

IREP at Montgomery sits on a 74-plus acre industrial site located at 1551 Louisville Street. The project will create approximately 110 local jobs.